No items found.
Product is not available in this quantity.
1000
1
Free express shipping on all orders 🚚‍
The Flow>Male doctors aren't listening to us 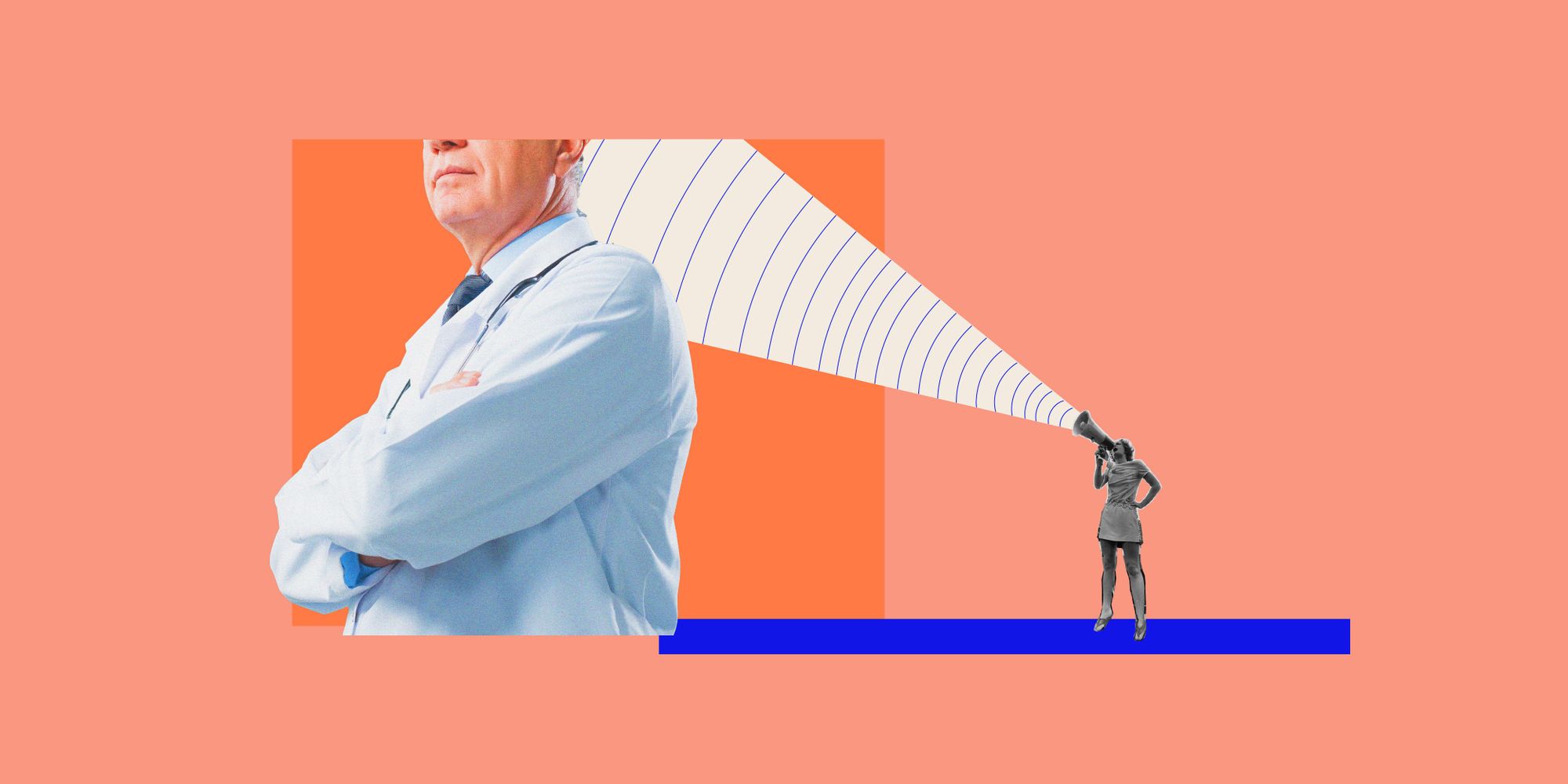 Male doctors aren't listening to us

Talking about sexual and reproductive health is hard.

So intrinsic to the lives of women and trans people, it goes beyond the physical, but also looks into the health of our relationships, and informs choices we make about our lives. We are asked to be transparent, vulnerable, and trusting with our most innate health problems and worries. But what happens when the healthcare professional you’re dealing with is a cisgender man who dismisses your pain, or diminishes issues that you know they’ll never have to face?

Having experienced lengthy painful periods, which led to a diagnosis of an ovarian cyst and a problematic contraceptive implant, my 2019 was fraught with appointments with my GP and a number of specialists - predominantly men.

Despite recording my symptoms as best I could and trying to ensure I got satisfactory answers from every appointment, I still felt burdensome at times. I fought against the feeling that I was exaggerating my symptoms, or wasting my doctor’s valuable time by trying to describe an acute pain that they would never experience. One male doctor’s coldness and clear lack of interest in my case left me disheartened. It was only when the ultrasound showed a 5cm cyst that I almost breathed a sigh of relief. At least I couldn’t be brushed aside - my pain was real.

How many women and trans people seeking advice around sexual and reproductive health have felt like they were not being taken seriously by a male health professional? And how has that impacted the decisions they took?

I spoke to a few people – from mothers, to linguists, to 30-year-old media workers – and found that for many it is still difficult to receive adequate support from male doctors.

When linguist and mother Stella* began experiencing random spotting and excruciating pain localised to her left ovary, her GP referred her to a gynaecologist.

“My GP couldn’t have been more helpful and reassuring, which made that part of the process much less scary,” she told me. “When I arrived for my consultation at the hospital, however, the doctor performing my ultrasound and examining both inside and outside my body was brash, cold, and dismissive of my pain.”

Unable to offer a reason for her pain, the doctor suggested a laparoscopy (a minimally-invasive surgical procedure used to examine the organs inside the abdomen). Scared and confused, Stella said she would need to think about it: “The idea of any kind of surgery was already daunting, and more so when I thought of the toddler that needed me at home. He laughed and said I couldn’t have been in that much pain if I didn’t care about the cause of it.”

Feeling like she had to choose between her health and her childcare responsibilities, and fearful that something might happen if she had the surgery, Stella ended up simply ignoring the pain.

“I decided not to speak about it anymore. It’s been around six years since that experience and at some point along the way, the pain stopped.”

Considering what a deeply personal experience it is to talk about your sexual and reproductive health, one negative interaction with a medical professional can be all it takes to shatter the implicit trust that exists between a patient and a clinician.

Some women spoke to me about their painful and debilitating periods and the patronising response they received from doctors when they brought it up. Others found themselves refraining from divulging certain things to their male doctors to negate any inappropriate or uncomfortable responses.

Seynam, a London-based media specialist, told me that her GP had responded to news that she had just turned 30-years-old by asking if she was planning on having children.

“If I was your brother,” he told her, “I would tell you to get a move on – three years from now it will be impossible for you to get pregnant.”

Recent graduate Coral said she was wary of disclosing her sexuality unless outright asked by a doctor, particularly when she was seeking reproductive health advice. “I know [not disclosing] could be counterintuitive, but any time I have said that I identify as bisexual it has been immediately followed with a wide-eyed, ‘ah’, and questions about when my last STI check was.”

According to research carried out by Oxford University's Nuffield Department of Primary Care in 2017, female doctors are better at empathy than male doctors.

Not only were female doctors found to score higher empathy ratings than male doctors, they also spent more time with their patients, making them feel listened to and like their concerns were being taken seriously.

Despite the possibility of greater shared experience, women and trans doctors are not exempt from perpetuating this kind of bias. However, many patients will just wait until they’re able to speak to a practitioner who isn’t a man - in spite of excruciating pain and worrying symptoms.

Diversity and inclusion expert Leyya has polycystic ovary syndrome (PCOS), endometriosis, and adenomyosis. She told me she had been complaining of her symptoms for over seven years, only to have them dismissed by her doctors, who were all men. They would often just prescribe the contraceptive pill, rather than refer her.

“I grew so frustrated,” she said. “I would happily wait four weeks to see a female doctor when it came to my gynaecological and reproductive issues and the schedule of GP appointments. It was only when I had a black female doctor that I was finally referred for all the relevant tests and procedures.”

It was a similar situation for Lynette, who has uterine fibroids and spent years overemphasising her symptoms in an effort to be taken seriously. It was only when she encountered a black woman GP that she found someone who believed her.

It’s unsurprising that patients can feel that, in order to have their conditions taken seriously, they must dramatise it slightly to avoid it being dismissed.

In other cases, patients like Stella have waited until their symptoms have reached a point where they can’t be ignored by the doctor.

“When I went for my initial appointment with my GP, I remember trying to wait until a ‘bad’ pain day, so I would be believed and wouldn’t feel as though I was wasting his time,” she explains.

“As much as it is important to stick to appointments and respect the time and effort of medical professionals, I do think that the stress of navigating the system of appointment-making places a huge burden on people to wait until they’re ‘sick enough’ before they’ll go and seek help.”

There’s also an additional element that black women and trans people have to consider when engaging with the healthcare system: Black people can be assumed to feel less pain than white people.

According to a 2016 study, biological differences between blacks and whites – dating back to slavery – can be associated with the idea that black people feel less pain than white people. It’s little wonder that black people may receive less sympathy and be expected to handle more pain, even by their doctors.

“I think every time I’ve been to the doctor, I’ve had to amp up my description of my pain in order for doctors to believe me,” notes Chloë, a mixed-race Black woman. “I found that I always seemed to get less sympathy than my white mother or white peers when speaking about the same issue - I actually stopped going to the GP for exactly that reason.”

With this understanding of the way their pain is viewed, black women have found themselves unable to fully disclose their problems, even downplaying the issues to themselves.

“I’m a thick, 5’8 dark-skinned black woman - the poster child of ‘just get on with it’,” Lynette told me. “I definitely feel like a lot of the delays in taking me seriously, and the trivialising of my pain, has been because of my characteristics and my own attitude, which was influencing my experiences and the ‘strong black women’ who have had no choice but to normalise suffering.”

So where does this leave us, particularly when it comes to engaging with doctors who are men, when so many of us have had bad experiences?

For some of us, it means learning how to advocate for ourselves loudly. This means asking direct questions like ‘Could you explain to me why you believe it is xyz?” or “I feel like I’m being dismissed, can you help me understand how you’ve arrived at this conclusion?”

If an encounter makes you uncomfortable or simply isn’t sufficient, then consider moving to a different practice. Trust your instincts when it comes to your health.

“As women, we’ve been taught from an early age to rationalise warning signs of physical or mental health problems,” Dr Fiona Gupta tells The New York Times. “If you feel like something isn’t right with your health, honour that - even if a doctor is disagreeing with you. It’s better to find out you’re wrong than to wait too long.”