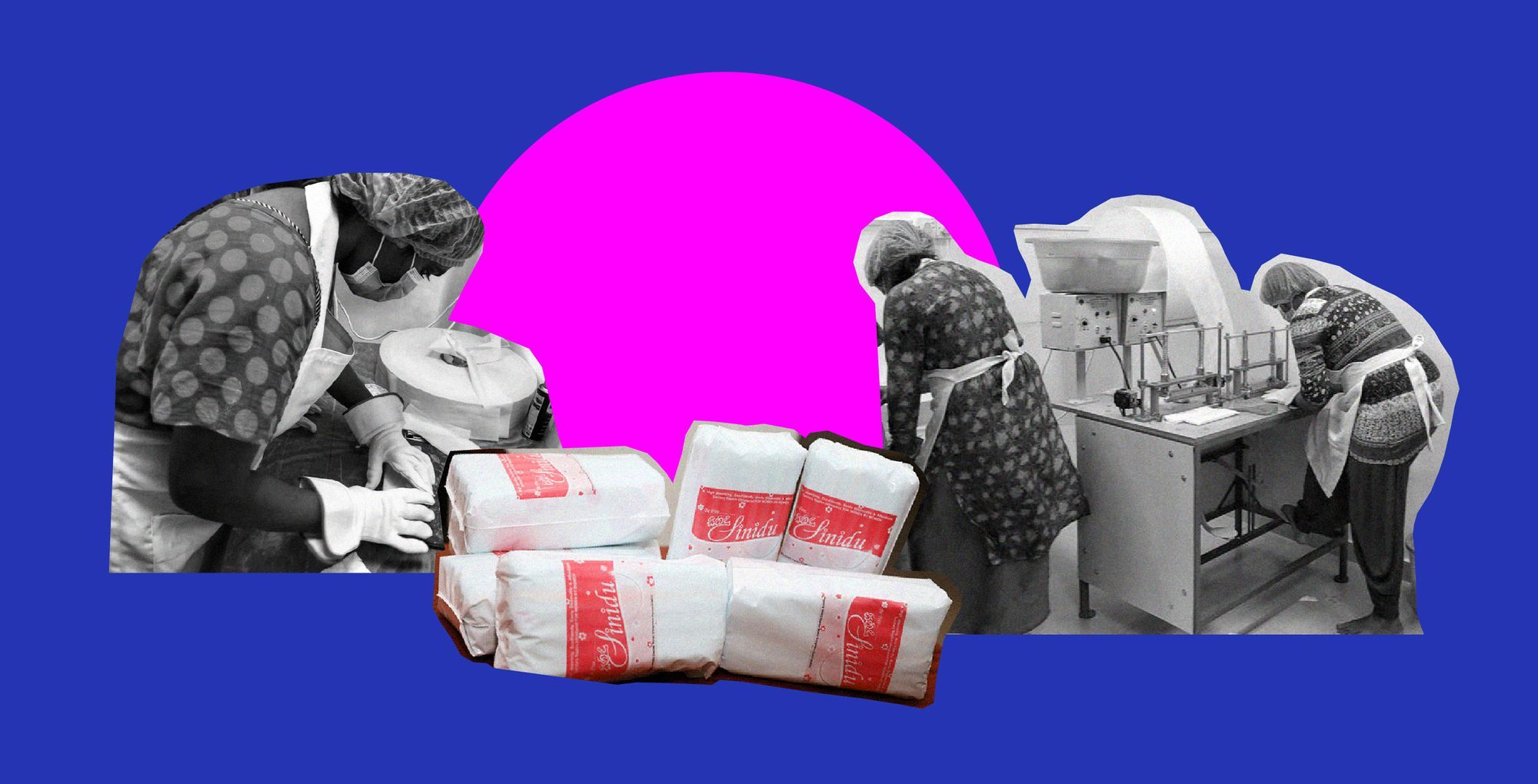 Every morning, Kamila Jaleel heads to work after she drops her two kids at school. At her workplace in Kitulwatte, a locality in Sri Lanka’s commercial capital Colombo, she joins the production process of low-cost, biodegradable sanitary napkins manufactured by a social enterprise named Sinidu.

“Before joining Sinidu, I used old rags during my periods,” says Jaleel, whose neighbourhood in Barber Street, Colombo, receives running water only six hours a day, during which she rinses her rags. Some of her colleagues at Sinidu do not have access to running water and must use a public well to wash their rags along with other clothes and kitchen utensils.

“They hide the rinsed rags from the men in the household,” says Jaleel. “Sometimes, these rags aren’t properly dried, but they would wear it again.”

Jaleel and her colleagues at Sinidu aren’t alone. Sri Lanka’s Chamber Women Entrepreneurs Council (SCWEC), a program that promotes women entrepreneurs, states that there are over 4.2 million menstruating people in Sri Lanka. Among them, only 30% have access to disposable sanitary napkins.

Others rely on semi-hygienic reusable options such as cloths and rags. “Some women even use leaves of trees and old newspapers,” says Jezaayar Hassendeen, founder of Sinidu.

A few years ago, Hassendeen was inspired by the story of Dr Arunchalam Muruganatham, otherwise known as Pad Man. In the late ‘90s, Muruganatham was a labourer in the rural outskirts of Coimbatore, India. Seeing his wife could not afford conventional sanitary napkins, Muruganatham’s efforts on inventing an alternative became successful when he introduced a low-cost manual machine for manufacturing biodegradable sanitary napkins.

Muruganatham’s innovation has been replicated around the world and, in 2019, his story became the centre point of the Oscar-winning Bollywood movie, “Pad Man.” He refuses to sell his innovations to cooperates but helps welfare groups.

Following a 15% Value Added Tax, even the cheapest, domestically manufactured sanitary napkins cost 130 rupees – a little more than an Australian Dollar – a packet.

Hassendeen says it’s a burden to many low-income families. “One of the families I met during my research had five female members. Their daily income was less than 1000 rupees (AU$8). If they spent money on menstrual hygiene products, they wouldn’t be able to sustain.”

Advocata Institute, an independent policy think-tank based in Colombo, states that the cost of a single imported pad is 24% more in Sri Lanka than it is in the USA, and 26% more than the retail price in neighbouring India.

But these issues run deep beyond the price tag. Menstruation is a stigmatized issue in Sri Lankan society, often associated with impurity.

According to UNICEF, 60% of school teachers in Sri Lanka think menstruation blood is impure while 80% think bathing should be avoided during periods. As menstruation remains a taboo topic, many people are unaware of the sanitary and health issues caused by poor menstrual hygiene.

“At our first workshop about raising awareness many women were reluctant to talk about menstruation,” says Hassendeen. “They will giggle or cover their faces.”

Hassendeen’s workshop was publicized to low-income communities as a generic health program, avoiding anything related to menstruation. Jaleel was one of the first women to take part in the awareness program and learned to produce eco-friendly sanitary towels using a biodegradable pulp made out of a locally-grown tree bark from India.

One low-cost machine was installed in Kitulwatte for clusters of low-income households. Today, twelve women from the community take part in the production process and sell the products to local schools and women.

A local prison in Colombo has also received a machine after Hassendeen learnt that each female inmate only received three sanitary towels a month. Jaleel was quick to learn the process at Kitulwatte and also trained the prison inmates.

Apart from selling surplus to local households, Jaleel and her colleagues now spend their time raising awareness on menstrual hygiene in Colombo neighborhoods.

A packet of ten Sinidu pads cost only 80 LKR (AU$ .65), which is 50 rupees less than the market price. A two-pad sachet is also available for women with acute financial difficulties. Apart from the sales revenue, Jaleel also receives a fixed monthly salary.

“My husband wasn’t happy about it at first,” says Jaleel, “but now seeing me sustain myself and our children, he offers me his full support.”

Hassendeen wants to carry the initiative beyond the capital city as a means of providing clean, hygienic menstrual products, as well as promoting entrepreneurship among low-income women.

“Menstrual hygiene is not a luxury, it’s a necessity.” says Hassendeen, “We are women working for women.”