Login
1000
1
The Flow>Is it safe to take antibiotics while on The Pill? 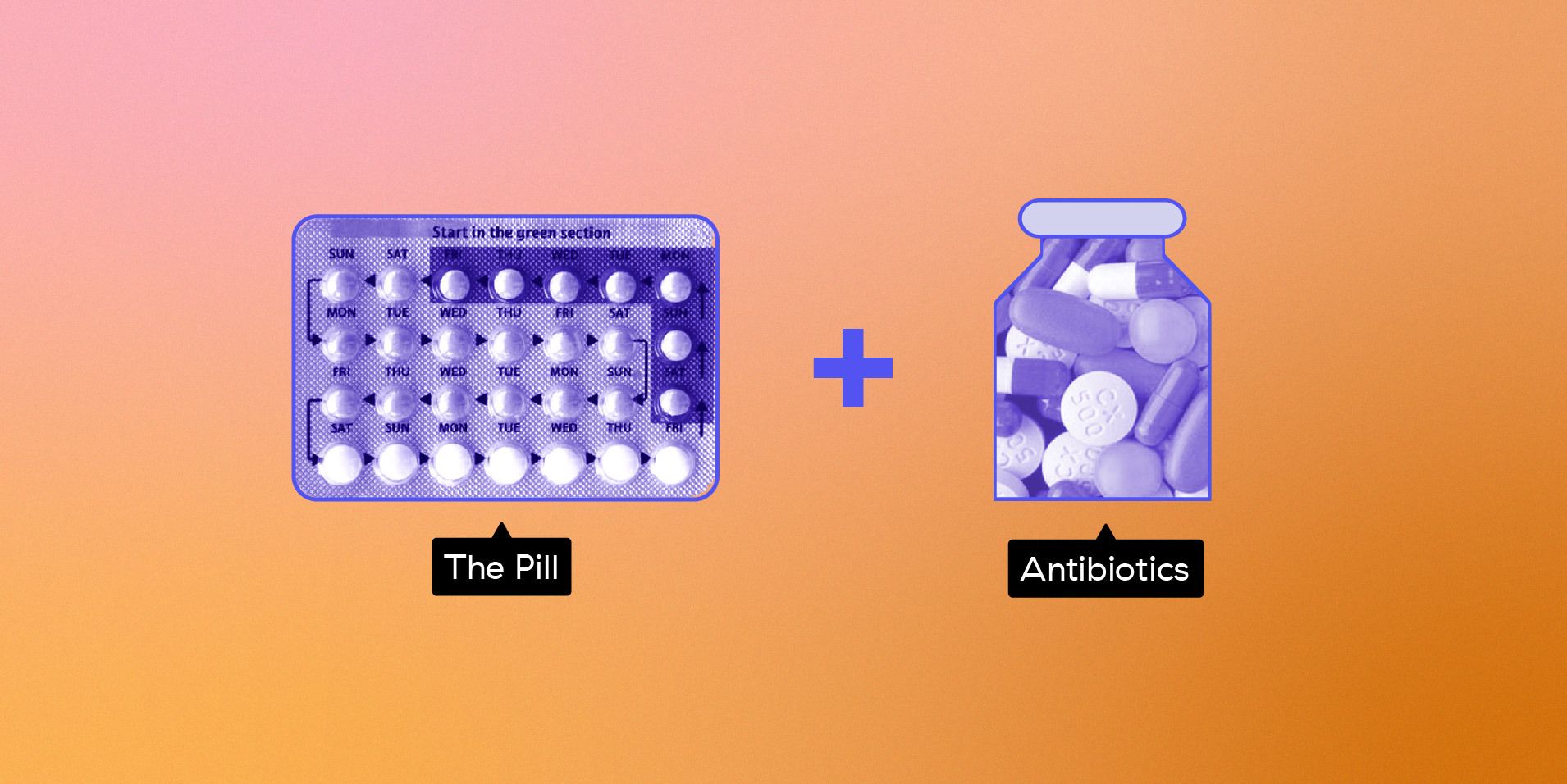 Is it safe to take antibiotics while on The Pill?

You’ve probably heard something like this before: Your friend’s step-aunt ended up with a bun in the oven because she was taking antibiotics while on The Pill.

As far as urban myths go, this is one of the most common misconceptions about the oral contraceptive pill. But is there any truth to the notion that taking antibiotics will reduce the effectiveness of The Pill?

The combined oral contraceptive pill (a.k.a. The Pill) is a medication used to prevent pregnancy and help manage the symptoms of painful, irregular periods. It stops the process of ovulation in its tracks by preventing a woman’s ovaries from releasing an egg each month. Plus, The Pill thickens the fluid around your cervix to stop sperm from entering the body. Each tablet contains two hormones: estrogen and progestogen (similar to the hormones your ovaries produce).

So where did the notion that antibiotics impact The Pill actually come from? Are there any types of antibiotics that can lessen the effectiveness of The Pill? And are there any other types of medication we should watch out for when on The Pill?

Where the rumours began

Like all good rumors, the source of this one is hard to pin down. Fertility and IVF specialist (and Kin Medical Director) Dr. Vamsee Thalluri explains that new studies have debunked old ideas about the impacts of antibiotics on the Pill.

“When I was going through medical school we were taught that if a woman’s on antibiotics you should assume The Pill isn’t working,” he said.

“However, in the last few years at least a lot of new data has revealed that all antibiotics (except for a select few) don’t affect The Pill at all."

“These days, it’s widely accepted that it’s only a select few types of antibiotics that impact the efficacy of The Pill.”

It’s not just Dr. Thalluri: other medical experts back this up, saying there are very few antibiotics that actually make an impact on the oral contraceptive pill.

So, why hasn’t this myth been debunked once and for all?

The confusion that exists between oral contraceptives and antibiotics is nothing new. A recent study revealed nearly 30% of respondents claimed they were aware of antibiotics having an impact on the effectiveness of The Pill. With so much information (and misinformation) being shared, it’s important to get the facts straight.

In many cases, this confusion stems from outdated studies and data used throughout the medical profession.

“For most GPs, the medical software they use when writing up patient notes will automatically prompt an alert when they go to prescribe antibiotics to a patient that is on The Pill,” says Dr. Thalluri. “So even though the studies have shown that it’s safe to take both at the same time, these alerts are still coming up in the system.”

So how do antibiotics actually work?

Antibiotics are processed by our liver and kidney. In some cases, antibiotics can cause the liver to work faster, hyper-process The Pill, and reduce the amount of medication that remains in our bloodstream. With less medication, this chance of ovulation and potentially even pregnancy can increase.

And what do the experts have to say about the link between antibiotics and The Pill? A study published in the Journal of the American Academy of Dermatology revealed that ‘plasma levels of oral contraceptive steroids’ remain ‘unchanged’ when taking most types of antibiotics, including:

For women taking antibiotics while on The Pill, Dr. Vamsee notes that in most cases there is no need to take extra precautions (although it’s wise to speak with your GP to find out what this medication means for your specific situation).

“It’s completely safe to use both at the same time, but if you want to use additional contraception as a precaution that’s also safe as well,” he says.

Are there any types of antibiotics we should be wary of?

Although in most cases taking antibiotics while on The Pill isn’t a problem, there are certain types of medication to look out for.

The strain of antibiotics known as rifampin (commonly used to treat tuberculosis) has been noted to make the contraceptive Pill less effective. Planned Parenthood has also echoed these remarks, noting that the antibiotic rifampin (also known as Rifadin and Rimactane) can lower the effectiveness of The Pill, patch, and ring, in some cases.

Another recent study published in the Canadian Journal of Infectious Diseases reinforces this, stating that oral contraceptives cannot be relied upon for birth control while taking rifampin.

Why is this the case?

This type of antibiotics boosts the number of enzymes in your body, which impact the effectiveness of the hormones contained in The Pill.

But Dr. Thalluri is quick to point out that this is antibiotics is not commonly prescribed and is typically used in the treatment of tuberculosis, which is not particularly common in Australia.

“It’s really the only type of antibiotics that can have a major impact on the liver enzymes, leading to an increased breakdown of The Pill that can make this contraception less effective,” he said.

So, what can you do if you’re worried about taking these types of antibiotics while on The Pill?

● Double-up your contraception during and seven days after your antibiotics course, such as using condoms.

● Speak with your doctor to assess whether it’s a good idea to change the way you’re taking your oral contraceptive during this time (such as increasing your dosage).

So, is it safe to take both at the same time?

In most cases, antibiotics won’t have an impact on the effectiveness of The Pill. It's more likely that things like forgetting to take your contraception entirely will be the thing that impacts you. However, it’s important to remember that regardless of whether you’re taking antibiotics or not, The Pill is only 91% effective with typical use. There’s still a low level of risk, so it’s always a wise idea to use additional levels of protection if you’re concerned.

But if you are taking both at the same time, it’s important to keep this in mind:

● If you’ve been vomiting or have diarrhea while on antibiotics, it’s possible that you might not be absorbing the Pill correctly. In this case, use back-up birth control to protect yourself from the possibility of ovulation or pregnancy.

● As a general rule, if you’ve vomited within 2 hours of taking the Pill, it’s wise to use an additional method of contraception for the next 7 days.

● It’s always a good idea to speak with your doctor to ensure you received health advice tailored to your unique situation.

Are there any other medications that can interfere with The Pill?

Taking multiple medications at the same time can reduce the effectiveness of each. Although the majority of antibiotics won’t interfere with the oral contraceptive pill, it’s worth noting there are other medications that can affect The Pill.

These include enzyme-inducing drugs that can speed up the body’s processing of some contraceptive hormones, thereby reducing the effectiveness of this method of contraception. So, what medications should you watch out for?

● Some medications used to treat epilepsy (such as anti-epileptic drugs)

If you’re concerned or have questions about the medication you’re taking, make sure to speak with your GP to find out what course of action is best for your situation.