Login
1000
1
The Flow>Money, and other things women aren’t supposed to talk about 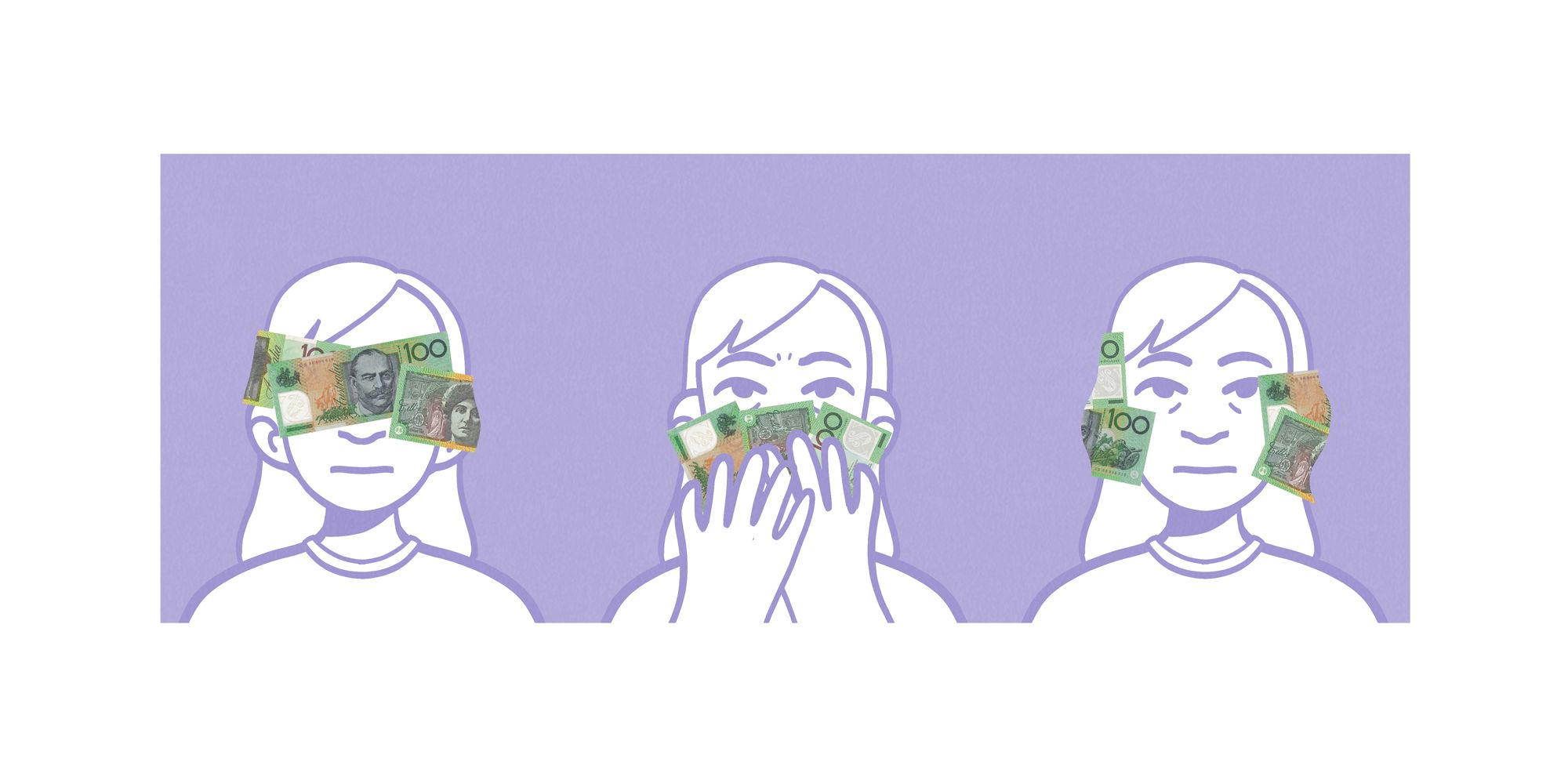 Money, and other things women aren’t supposed to talk about

I’ve never been the type to split bills. The idea of squabbling over the EFTPOS machine, trying to figure out who ate what and how we can divide the final sum gives me this icky feeling in the pit of my stomach. Instead, I’d throw down my weathered debit card and hope the transaction would go through. I’d choose convenience over calculating the costs any day.

I wouldn’t chase up what I was owed. I didn’t want to make a fuss. I’d avoid checking my bank balance until my card declined. That would happen more than I’d care to admit.

But my approach to money isn’t unique. For as long as I can remember, the idea of women speaking up and sharing our money concerns isn’t considered a palatable topic of conversation (you can thank the gender stereotypes we’re conditioned to believe as kids for that).

When I think about my own feelings towards money, it’s tied up in fear and worry that I’m going to say ‘the wrong thing’.

Women have historically been on the back foot when it comes to our finances. Despite the steps we’ve taken towards equality, the gender pay gap is still well and truly alive in Australia. Women *still* on average earn $242.90 (13.9%) per week less than men, the result of a whole bunch of factors from women’s overrepresentation in unpaid care and domestic work to female-dominated industries attracting lower wages.

So, why do I still find myself with sweaty palms when I think about asking for a pay rise at work?

In 2020, women want to be financially literate and empowered about our financial future. But there’s another side to the story that’s holding us back: we don’t feel like we’re educated enough (or earning enough) to take our finances seriously.

A recent study by Fidelity Investments points to this, surveying 1,542 women over the age of 18 who were employed or even retired. The study revealed 83% of women keen to learn more about their money, while 8 in 10 women said they avoided conversations about their finances with their closest friends and family. So, what role does talking about money play in helping women improve their financial confidence?

The link between what we’re taught and how we talk

Women aren’t inherently bad with money, despite what society and the media might lead us to believe. It’s not surprising that a recent linguistic analysis by Starling Bank of 300+ financial articles from across the globe revealed the deeply gendered language used to describe women and money.

Here’s a snapshot of what the study uncovered:

● 65% of articles targeted at women defined them as “splurgers” and excessive spenders who needed to “reign in” their spending.

● The language used to describe women’s relationship with financial planning used threatening phrases such as framing the concept as “a minefield”.

● One-third of the articles assumed that women would bear the brunt of responsibility for unpaid family support and domestic care.

● In contrast, financial articles aimed at men spoke of a landscape of opportunity, using competitive phrases such as men “having a punt” or “playing the game”.

● Plus, 70% of men’s magazine money articles created a clear link between financial success and their status as a man, using fear as a clear tactic to entice big purchases and investment decisions.

For Starling Bank’s CEO Anne Boden, there’s a clear link between how we’re socialised and how we behave. “The media talks about women and money in a certain way, so the people reading it start talking that way, too. It’s what sticks in your mind,” Boden tells The New York Times.

This research is part of the #MakeMoneyEqual campaign launched by Starling Bank, on a mission to reframe the language used to speak about women and money. The campaign calls out the lingo used by financial institutions, women’s magazines, and media outlets, creating a new framework for journalists and writers that’s free from gendered stereotypes and reductive language. It’s about ditching guilt-tripping narratives, swapping “penny-pinching” tactics for macro-savings techniques, and acknowledging that women are now the primary breadwinners in 40% of households.

Disrupting the media landscape and shifting ingrained perceptions of women and money isn’t something that can shift overnight, as Boden explains, “I founded a bank, so naturally, I’m comfortable talking about money. But even I sometimes feel like I need to apologise when I spend money on myself.”

When it comes to women’s apprehension towards talking about money, the factors at play are complex and multifaceted. And, not surprisingly, these behaviours often stem back to the way society tells us we should behave.

Growing up in a single-income household with a stay-at-home mum, I remember seeing dad as the one who ‘managed the books’ at home. He’d be at the kitchen table, running through budgets and spreadsheets while mum was feeding the dogs and working out what we would have for dinner. It’s only in hindsight I realise just how subtly these gendered roles can play out.

Recent stats from Fidelity Investment’s Money Fit Women study indicate four in five women have refrained from talking about their finances with those they are closest too. These 1,542 respondents cited a range of factors leading to this behaviour, including the topic being too personal (56%), feeling uncomfortable about the conversation (32%) and as well as being raised to not talk about their finances (27%). With all of these assumptions racing through our thoughts, it’s no wonder that bringing up our salary over brunch is a tough ask.

But this fear towards talking about money doesn’t just exist with our friends, family, and partners. It’s also stopping women from seeking professional financial advice, with this study also revealing less than half of the women surveyed would be comfortable discussing their money with a financial adviser. Without this knowledge under our belts, we’re leaving the decision-making to someone else: our partners. In fact, 58% of women globally defer to their male partner when making important, long-term term money decisions.

I like to think I’m pushing back against this. My partner and I split rent and bills equally. I’m earning a decadent wage and have a healthy bank balance to show for it. But when the dinner bill lands on the table, he’ll pick it up more often than me. And I rarely talk about money with my friends for fear that we might realise the differences in how much we earn. I’m not perfect at it, but I’m trying to rethink the way I view (and talk about) my relationship with money.

How can we start talking about money?

When I think about my own feelings towards money, it’s tied up in fear and worry that I’m going to say ‘the wrong thing’. And as I’m quickly learning, the only way to get better at something is to face it head-on.

But there are plenty of places to provide a framework for these tricky conversations. The free online platform Ladies Talk Money shares candid conversations that tackle common money painpoints (like how much super we need before retirement, and how the heck to start investing).

“More than ever, women need strong financial literacy skills to help us understand our own circumstances, especially women who have been kept out of the conversation for too long,” co-founder and independent financial adviser, Jessica Brady, tells Kin.

So, what are these expert’s top tips for talking about money? Here’s some pointers to get you started:

● Use your financial blind spots or knowledge gaps as a starting point for conversation.

● Start small and don’t try to tackle everything at once. Try picking one topic to discuss, and go from there.

● Struggling to talk about money with your partner? Why not schedule a regular money catch-up to help you both get on the same page with your finances.

● If money is a source of conflict in your relationships, try to reframe the way you approach the conversation. Try to tackle any concerns or problems you are encountering as a team, rather than treating it as a competition.

● Be open about your savings goals and strategies with your friends, family and partner. This will help them support you along the way and will prevent them from accidentally sabotaging you along the way.

What I know for sure is that change doesn’t happen overnight. I still get that uncomfortable itch at the back of my throat when I chase up unpaid invoices. But I send the email regardless.

I’m proactively sharing my money goals with my partner, and why they’re important to me. I’m slowly letting go of the excuses I used to make when bailing on a boozy night out with my girlfriends (because spending $80 on cocktails doesn’t always fit my budget). And I think that’s how I, and we all, get better at this thing called money: one conversation at a time.