Login
1000
1
The Flow>What does the Religious Discrimination Bill mean for women's rights? 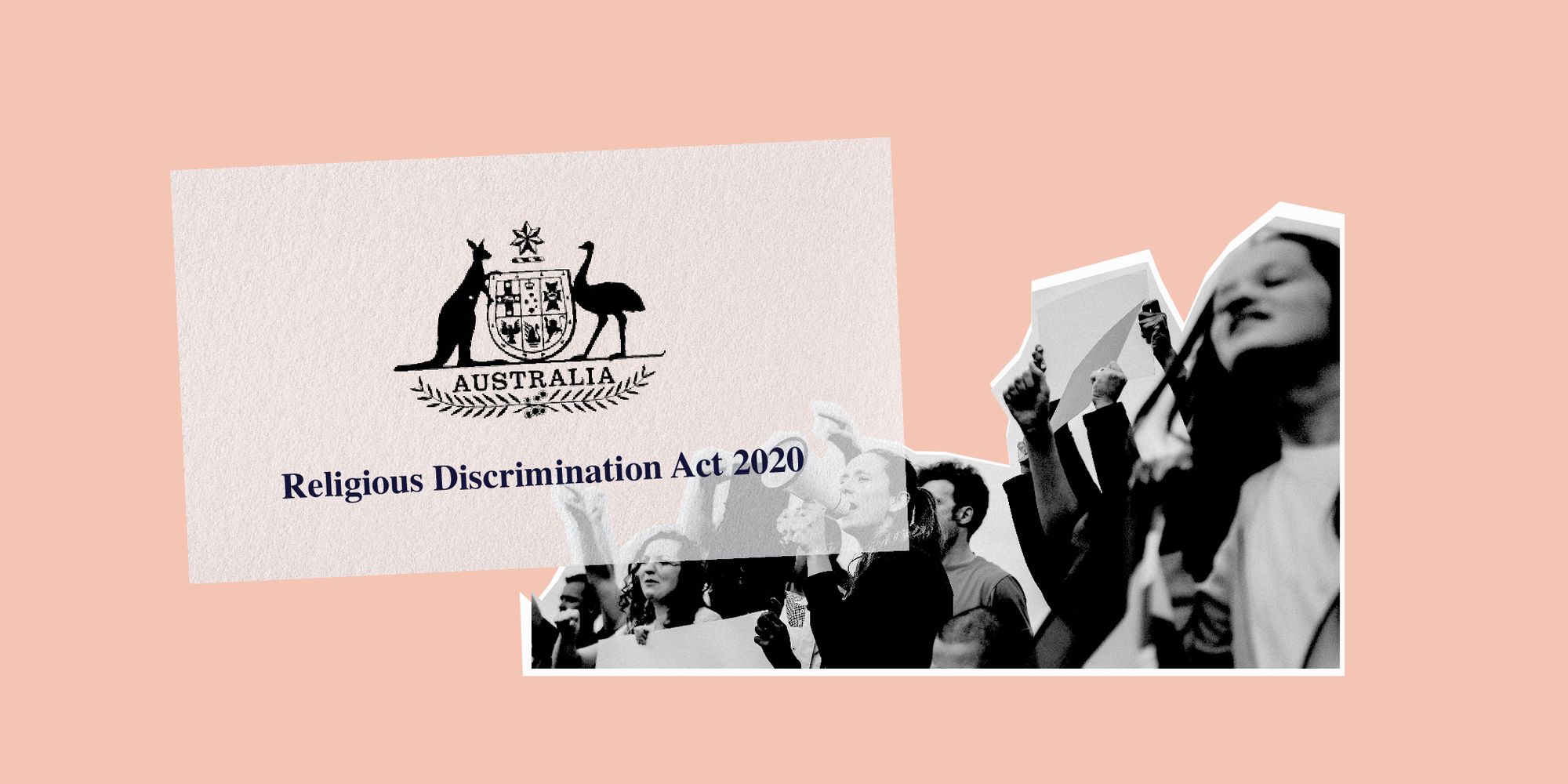 What does the Religious Discrimination Bill mean for women's rights?

The Government’s proposed Religious Discrimination Bill has been described by women’s right campaigners as “the biggest threat to reproductive healthcare access in decades”. It has been opposed by everyone from big business to the Greens and the unions. Even Ian Thorpe has made a point of speaking out against it.

But what's all the fuss about?

Well, in case you haven’t been following, let us break it down for you here, and explain why sometimes, preventing discrimination could actually mean protecting prejudice and enshrining discrimination instead.

So where did the bill come from?

The Federal Parliament is currently considering the second draft of the Religious Discrimination Act, released in December last year (after the original draft was heavily criticised by organisations on both sides of politics).

The bill has a slightly complicated history, but the basics are:

● During the 2017 debate on how to legislate marriage equality (following the historic success of the referendum on Same-Sex Marriage), protections for religious freedom became a sticking point for members of the Turnbull Government, with concerns that members of the clergy might be stuck between faith-based beliefs about homosexuality and a legal obligation to marry same-sex couples.

In order to ensure swift passage of the marriage equality legislation, the Prime Minister asked former attorney general Philip Ruddock to lead a panel to review the issue of religious freedom.

● The panel received more than 15,500 submissions; marriage equality groups and unions argued that the Government should end exemptions to discimination laws which allow religious organisations to discriminate in a range of areas on the basis of sexuality (from performing marriages to hiring and public statements).

● The panel reported to the Turnbull government in May 2018, and made a series of recommendations. The first draft of the current bill is based on some of those recommendations.

What’s the basic principle of the bill?

Why has it been criticised?

Though it may seem like the bill will automatically be a positive step for human rights and anti-discrimination in Australia, it is actually highly controversial. That’s because certain religious freedoms protected in the bill can come at the expense of the rights of other people - especially for women and LGBTQI+ Australians - in a way that could make it a smokescreen for enabling discrimination.

Some of the specific areas of concern are:

Under the legislation, medical professionals (nurses, midwives, doctors, psychologists and pharmacists, removing dentists, occupational therapists, optometrists, physiotherapists and podiatrists) can refuse to perform procedures or give treatments based on conscientious objection.

For example, this could include a woman being denied the contraceptive pill, the morning-after pill, or an abortion. And to be clear, conscientious objection is allowed as long as it is in a blanket and non-discriminatory way (i.e. a Catholic doctor can’t refuse contraception only to single women, but give it to married women). Which feels sort of ironic.

Access particularly becomes an issue in areas with limited options in terms of healthcare professionals - such as rural or regional areas. In areas of the United States where abortion laws have become more restrictive in recent years, this has become a huge issue (especially for poor women).

However, it’s still not clear how professional codes of conduct will treat this - for example, whether doctors will be prohibited from refusing to treat where it will have an adverse impact (because of delay, distance or cost) might hold up against this.

Protection for offensive or discriminatory statements in the workplace

A person would have a right to make offensive, damaging, uninformed, or discriminatory statements in the workplace, if those statements are grounded in religious doctrine. This would leave many employers unable to enforce their safe workplace or anti-bullying policies. This part of the bill, described as creating "religious privilege" to discriminate by the ACT’s Chief Minister, is known as the Israel Folau clause (based on the scandal involving rugby league star Israel Folau’s homophobic and transphobic online comments, which led to his firing by the National Rugby League in 2019).

The provision is particularly hard on large businesses with a turnover of more than $50m, which would have to show that they would suffer “unjustifiable financial hardship” to escape the ban.

Potential examples of protected statements would now include:

● Disability is a result of turning your back on God, or can be healed through prayer

● HIV is a punishment for the sin of homosexuality

● Gay people are going to hell

● Mental health issues or addictions are the work of the devil

● Every child should have a mother and father who are married

● God made only men and women

● Someone of a minority faith is a heathen destined for damnation

● After a miscarriage, someone should ask God’s forgiveness for their child’s death

This could also extend further protection to medical professionals in their relationships with patients. The new bill would impose a further restriction on qualifying bodies – such as those that admit doctors and lawyers to practise. These would stipulate that they cannot impose rules like a social media code of conduct that restricts statements of belief unless they are an “essential requirement” of the profession.

The second draft bill includes provisions allowing religious hospitals, aged care facilities, and accommodation providers such as retirement homes to discriminate against staff on the basis of religion in order to preserve the “religious ethos” of that institution. In the worst-case scenario, this could create grounds for schools, hospitals and the like to fire - or refuse to hire staff - based on a range of factors, including sexuality, faith, transgender status, and more. By attempting to prevent discrimination, the bill actually enables and entrenches old forms of discrimination.

What’s been happening on the issue lately?

Consultation on the second draft of the bill took place earlier this year, and at present, the debate is continuing in the press.

The main supporters of the bill include the Morrison Government, as well as major religious bodies including the Sydney Anglican Church and the Australian Catholic Bishops Conference.

However, not all religious bodies have aligned themselves with bill. For example, the St Vincent de Paul Society (Vinnies) has asked not to be “used” to promote the bill (after being cited by the Attorney General as an example beneficiary of the exemption allowing religious requirements for staff), stating it has no need or desire to discriminate against prospective staff based on religion.

The opposition to the bill currently includes a range of political and civil society actors. High-profile Australians like former Olympic swimmer and LGBTQI+ activist Ian Thorpe, who has been campaigning alongside LGBTQI+ organisations like Equality Australia. The Greens are strongly opposed and campaigning against the bill in the press, while Labor has signalled it is likely to oppose the bill but hasn’t confirmed yet.

The Australian Medical Association (AMA), which represents doctors in Australia, has said that doctors “have an obligation to the patient in front of us” to treat or refer them for care, and expressed concerns about the right to “walk away and not have anything to do with it” proposed by the original bill.

Big business in Australia is also warning the bill will impose large legal costs, damage their reputations, harm productivity, and risk creating unsafe workplaces. Employers are required by law to ensure that workers are not exposed to risks to health and safety, including "workplace bullying, aggression, harassment including sexual harassment, discrimination, or other unreasonable behaviour". In fact, the Australian Council of Trade Unions and Australian Industry Group have come together to oppose the bill, in a rare show of unity.

There are also those who see both sides, like the Human Rights Law Centre:

We recommended that the Australian Government introduce religious discrimination protections as part of a consolidation and modernisation of federal anti-discrimination laws and alongside a Charter of Human Rights. However, we would support an appropriately balanced Religious Discrimination Act that would provide a shield to protect people of faith from discrimination, provided that it did not also give a sword to discriminate against others under the guise of religion.

Wait - didn’t we always have a right to religious freedom?

The Australian Constitution has a surprisingly limited set of protected rights (many people assume we have more rights than we do, or that we have a Bill of Rights like the United States).

Most of our rights are actually not explicitly stated in the Constitution - but one of the three rights which are expressly stated is religious freedom. However, this does not necessarily mean protection against religious-based discrimination, or protection for workplace statements grounded in religious doctrine.

What can you do?

Educate yourself about the bill, and decide what you think. if you believe it will be a step backwards for Australia, then you might want to consider taking action in the following ways:

● Write to your representatives (Federal Senators and MPs)

● If you’ve experienced any discrimination or abuse yourself, you may want to speak to a lawyer or a counsellor - and know that if you are ready to share your story, consider sharing it with one of the organisations campaigning on the bill.