No items found.
Product is not available in this quantity.
1000
1
Free express shipping on all orders 🚚‍
The Flow>A simple guide to feminism 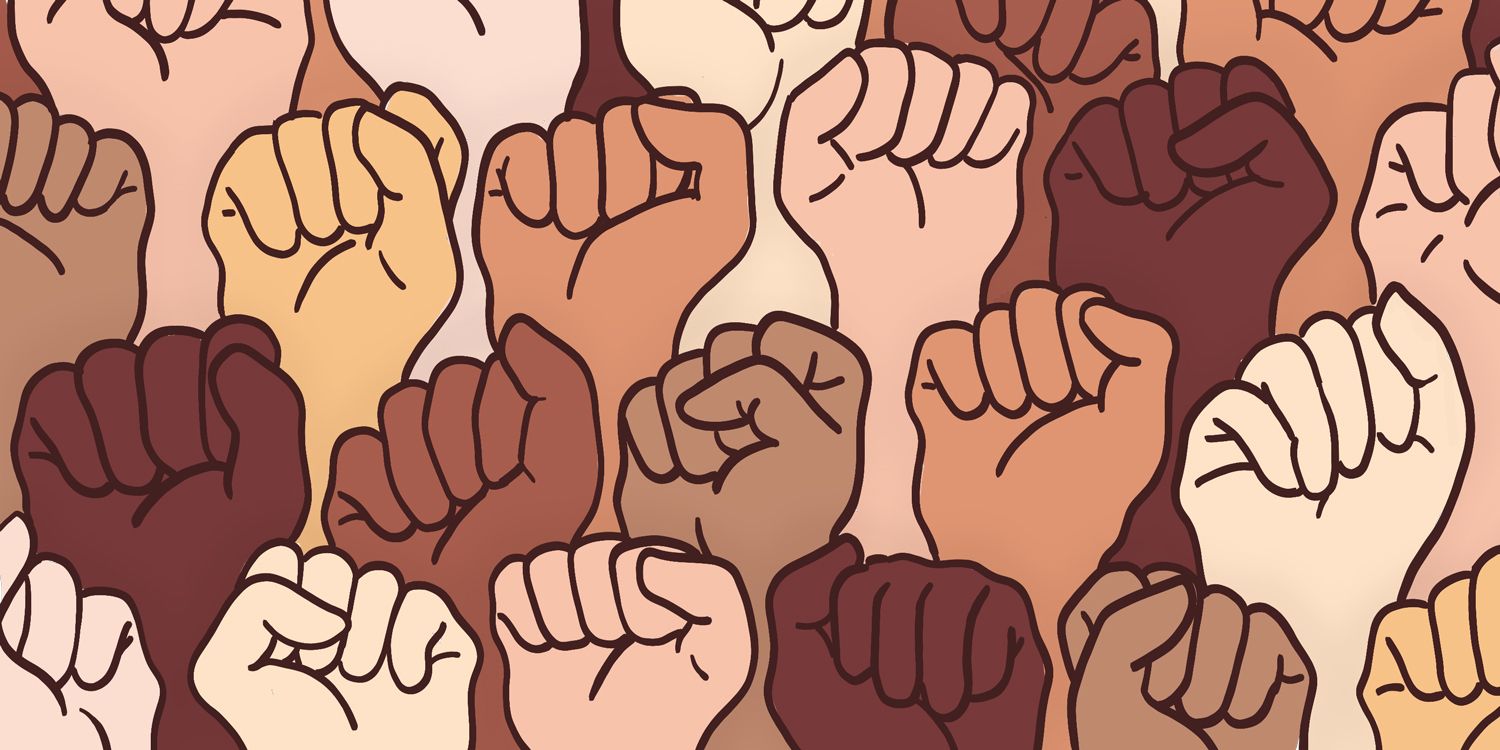 A simple guide to feminism

Ever sat in a theatre full of women, been asked if you think of yourself as a feminist, and realised you were one of just three people who put their hand up?

Take it from me - it’s a moment you’ll reflect on for a decade.

I couldn’t quite understand it - were my schoolmates embarrassed by the feather-ruffling stereotype of a feminist, or yearning for a return to 1950s gender relations? But after asking a few of them, it became clear that they didn’t use the label for one of two reasons:

One: They weren’t super clear on what feminism really meant. Or...

Two: They didn’t feel like it was really necessary in their lives - they already had equality, after all. Feminism was a movement that belonged in the past, not a present-day concern.

Over the intervening years, I’ve watched as many of the people who sat in that lecture hall have become proud, opinionated feminists - whether through more education, reading more widely, their social circles, or their direct experiences. They realised the feminist movement was neither over nor irrelevant.

However, as many a heated Facebook debate can attest, the simple notion of gender equality can translate into a complicated landscape of ideas.

That’s part of why we wrote this guide. Here at Kin, we see feminism as an essential piece of who we are. It was an early feminist who funded research into the contraceptive pill (Katherine McCormack, a wealthy American suffragist and activist), and it was feminists who campaigned for access to birth control.

So read on for answers to all the questions you’ve ever had about feminism, and if we’ve missed something, let us know.

Yes! But it can be a little more complicated.

Some feminists argue that equality should mean being treated in identical ways and having similar outcomes. That means women should earn as much as men, work fifty per cent of jobs in all industries, and be held to similar expectations around appearance and demeanour.

Other feminists, known as difference feminists, argue that women and men don’t need to be the same to be equal - that there might be areas where they choose to live and express their personalities in different ways.

Still, others argue that the idea of gender is something which should be deconstructed or dismantled entirely, and that instead of emphasising equality between the categories of ‘men’ and ‘women’, we should be erasing the categories and acknowledging the fluidity of gender.

Can men be feminists?

Anyone who believes in equality (whichever version that means) can be a feminist. Some prefer the term ally for those who don’t identify as women, but it’s definitely a big tent.

Moreover, there’s increasing recognition that for feminism to be successful, men need to be part of the change - not just standing on the sideline. As former Australian prime minister, Julia Gillard, writes:

"Despite all the progress made, men still dominate positions of power. And, as a string of recent harassment scandals has shown, the behaviour of some men has had profound effects on women’s careers, their success and their lives. The good news... is that many men are acknowledging the importance of playing their part to make gender equality a reality."

What are the waves of feminism?

Though there were early feminist thinkers and activists throughout history - people who believed women were the equals of men and believed in some kind of social change - feminism as a movement really came to life in a series of more recent waves.

The "first wave" of feminists focussed mainly on issues of suffrage (the right to vote), political candidacy (the right to run for office) and women’s rights to own property, throughout the late 19th and early 20th century.

They organised themselves through marches, lectures, and protests, with many being arrested and ridiculed for their work. The right to vote was considered particularly important; the political power which came with suffrage was considered the gateway to securing a raft of other rights.

The second wave feminists came to the fore in the 1960s and 70s, beginning in the US and spreading to other countries around the world. They argued that the personal, private sphere of the home was in fact intensely political.

After World War II, in which many women were temporarily allowed to enter male professions, many women experienced a sense of frustration at being expected to return to a largely domestic role again. Ideas which had proliferated in earlier decades in academic circles - around bodily autonomy, as well as the right to equal intellectual and professional freedom - grew in their reach through popular books like Betty Friedan’s The Feminine Mystique.

Second wave feminists fought for a series of legal and political victories around the right to control reproduction (through contraceptives and access to abortion), the right to an equal wage and entry into male professions, an equal right to enter educational institutions, the right to apply for mortgages and credit cards in their own names, and the rights of women in the home (for example, increasing awareness of and stigma around domestic violence). They also fought to reshape culture and sexist stereotypes.

However, second wave feminists tended to speak from the experiences they knew best - that of middle-class, educated, wealthy, typically white women.

Though movements for racial equality and women’s rights often worked together, the goals and priorities of the feminist movement remained rooted in the experience of women looking to leave the home - an experience which was not shared by working-class women of colour who already worked to support themselves.

The third wave began in the 1990s, and is in some ways the least cohesive / well-defined. However, some of the key themes included:

● Responding to the weaknesses of second-wave feminists on issues of class, race and other areas of disadvantage, by elevating the idea of intersectionality - namely, that women’s experiences of sexism were different and shaped by other factors. For example, a black woman did not experience racial discrimination and gendered discrimination separately; they were experienced in combined, nuanced ways - and the fight for equality needed to be sensitive to that. This also fuelled an increasing sense that the fight for gender equality was intimately connected to the fights for economic and racial justice.

● A backlash against workplace harassment and other ‘non-formal’ inequalities which were rooted in culture rather than law (kicked off particularly by the Anita Hill hearings in the United States).

● A recognition of the idea that gender and sex are not identical (Judith Butler’s view that sex is biological, while gender is something we perform through our appearance, demeanour and behaviour). With this came greater alignment with the LGBTQ+ rights movement.

● An embrace of a more nuanced view of sexuality, femininity and ‘girlishness’; where second wave feminists were perceived to have rejected the idea of femininity, grooming, and fashion as a sort of gilded cage for women, third wave feminists were more willing to see these as expressions of genuine personality and empowerment.

Is there a fourth wave of feminism?

If you were looking for a distinct shift, the tone and methods of online feminism (through feminist media, social media and grassroots movements like the #MeToo movement) might be a cutoff point.

Even if it leads to action on the streets, much of contemporary feminism is debated and organised online. With the continued progress of the LGBTQ+ rights movement in winning legal victories (like same-sex marriage) and representation in popular culture, there is more discussion than ever of how feminism can be queer and trans-inclusive.

Like the third wave, this potential new phase doesn’t have distinct leaders, clear organisational structures, or clear legal-political goals. In many developed countries, most discriminatory laws have been removed - and shifting inherited cultural attitudes and economic inequalities is more of a focus. These have more complex causes and solutions, and in some way, the messy nature of these recent waves probably reflects that.

How can feminism affect my daily life?

Apart from the fact that in Australia we owe our political, legal, and bodily rights to the work of feminists (no small thing!), the ideas of feminism can continue to shape the way we live our lives.

The way you approach your body, demeanour and appearance is influenced by deeply ingrained social ideas about gender and beauty that feminism sets out to examine. It can also help to share your responses to casual sexism, toxic masculinity and workplace cultures which allow sexual harassment. And as always, the personal can be political - feminism can  provide a guide in terms of how you treat other women and navigate dilemmas in relationships.

Contemporary feminism can’t be reduced to a single viewpoint or set of recommendations, but it provides tools to navigate what can feel like overwhelming and conflicting expectations around being a modern woman.

And it doesn’t need to be discovered through academic texts (in fact this guide should help you to avoid a few!).

From social media, to magazines and websites, to amazing podcasts, to simple conversations with friends and other women, there are a lot of ways to learn more about how feminism can change your life.