Login
1000
1
The Flow>What are the laws around abortion in your part of Australia? 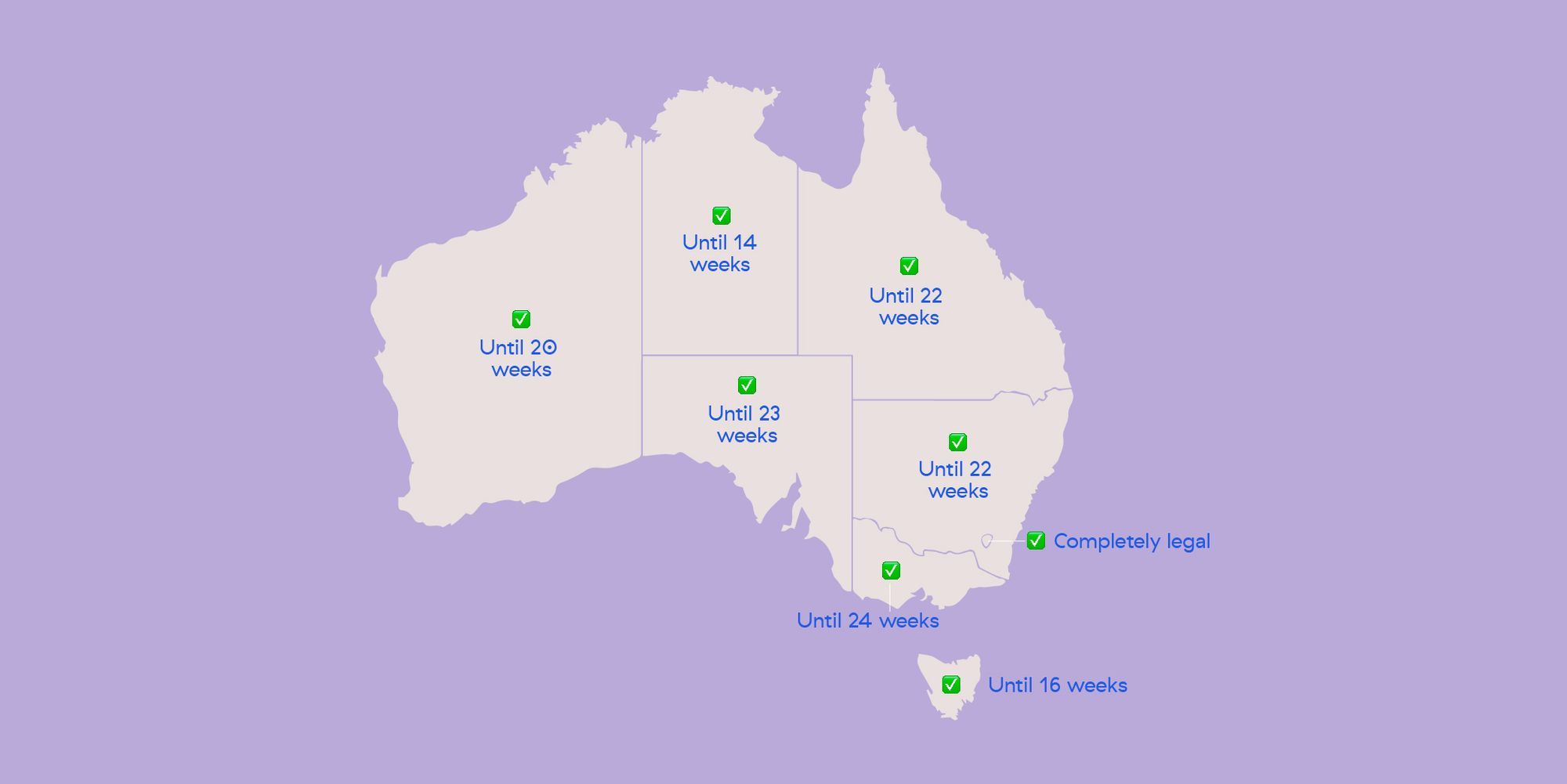 What are the laws around abortion in your part of Australia?

By definition, the term ‘abortion’ refers to the deliberate termination of a human pregnancy. When other contraceptive solutions have failed, abortion services allow many women, pregnant people, and couples, an option for deliberate family planning. It allows those who could become pregnant to have agency over their futures and the future of their family in a safe and medically sound manner. However, for many leaders, abortion is a topic of lively debate that affects the lives and bodies of many women and pregnant people around the world.

When abortion was decriminalised in New South Wales in 2019, the debate was again brought to the forefront, but little was discussed of what the policy actually meant for Australians across the country.

In Australia, access to abortion has been a topic of national debate, leaving those in need lost, uncertain, bewildered, and scared.

Those who are pushing for access to abortion services argue that it is up to the pregnant person, in consultation with their doctor, to choose what is best for their body and future without the fear of committing a criminal offence. However, critics view the procedure as fatal to a life that began at conception and whose rights need to be protected. It is a debate that is divisive and rarely met at consensus.

In 2019, New South Wales overturned the Crimes Act of 1900, which ended a 119-year run of criminalising abortion in the state. This policy change made access to abortion legal in every Australian state and territory with varying levels of state regulations. According to New South Wales Health, the new Abortion Law Reform Act “establishes a health-centered approach for termination of pregnancy” and “supports a woman’s right to health, including reproductive health and autonomy.”

Most importantly, the new Act allows women and pregnant people to undergo abortions without fear of being charged with a crime while offering new provisions for both patients and practitioners.

Abortion by State and Territory

Abortion is not a nationally passed law in Australia, but rather it is a debate that is left up for each state to decide what parameters for the service is best.

Here’s an overview of the varying regulations by state:

As mentioned previously, abortion is legal in New South Wales up to 22 weeks gestation. After 22 weeks, the patient must get the approval of two doctors to proceed with the procedure. Practitioners who have a conscientious objection to abortion (when a doctor’s personal views do not agree with providing abortions) must provide a referral or further information in order for the patient to receive care from an alternative healthcare provider.

In October of 2018, the Queensland parliament passed a bill that decriminalised abortion in the state. Similar to New South Wales, Abortion is legal in Queensland up until 22 weeks gestation and any procedures beyond this point needs the approval of two doctors.

Abortion is legal in the state of Victoria up to 24 weeks gestation, and any procedures after this point in the pregnancy requires the approval of two doctors. The state also enforces that no protests are legal within 150m of an establishment offering abortion as a service.

A surgical abortion (when the fetus and placenta are surgically removed from the womb) is accessible in the Australian Capital Territory up to 16 weeks gestation. Medical abortions (when medication is used to terminate an unwanted pregnancy) are only performed up to 9 weeks. In special circumstances, the Canberra Hospital can perform abortions beyond the designated 16 weeks gestation. GPs and Pharmacists in the ACT are able to apply to have an exclusion zone around their facility in order to prevent demonstrations or protests from deterring patients.

Abortion is only to be performed if it is no more than 23 weeks into gestation, and a medical assessment is needed to meet legal requirements. The procedure is still regulated by criminal law, and the penalty for an illegal abortion is life imprisonment. Attorney General Vickie Chapman has been drafting a bill to decriminalise it in the state following an independent report from the South Australian Law Reform Institute last year.

In Western Australia, abortion is legal up until 20 weeks gestation. After 20 weeks, two of six doctors appointed by the Health Minister must confirm that the mother or unborn child has a severe medical condition making the abortion in their best interest. Pregnant people under 16 years of age need parental consent or can apply to the Children’s Court for an exception. The Western Australia criminal code states a fine of up to $50,000 and 5 years imprisonment will be served to any practitioners performing “unlawful” abortions, but the patient themself is not criminally responsible.

Abortion is legal in the Northern Territory up to 14 weeks gestation as long as the patient has the approval from a doctor. A pregnant person can also receive an

abortion between 14 and 23 weeks with the approval from a second doctor. Unless the life of the pregnant person is at risk, abortion is not legal beyond 23 weeks gestation in Northern Territory.

Abortion has been decriminalized in Tasmania since 2013, making abortion lawful up to 16 weeks gestation. Any abortions performed after the 16 weeks requires the approval of two doctors, and any doctor with a conscientious objection must provide a list of prescribed health services for patients to seek alternative care. The state also enforces that no protests are legal within 150m of an establishment offering abortion as a service.

Due to the sensitivity of the topic, abortion policy fluctuates not only in Australia but around the world. Therefore, it’s important to regularly check the laws and regulations in your state as they are subject to change.

Although the debate over access to abortion is unlikely to gain consensus any time soon, Australia is in a place where abortion is the most accessible it has ever been.

The 2019 decriminalisation of abortion in NSW was a big leap forward in ensuring 4 million more people who can become pregnant have control over their future family life.

If abortion is a service that you find valuable, support the people in your life who choose it as their best option, write to your local MP to ensure they understand the importance of bodily autonomy, and vote for future leaders that respect and trust people to make the best decisions for their bodies.