No items found.
Product is not available in this quantity.
1000
1
Free express shipping on all orders 🚚‍
The Flow>Why I still get cross when people ask "how" my twins were conceived 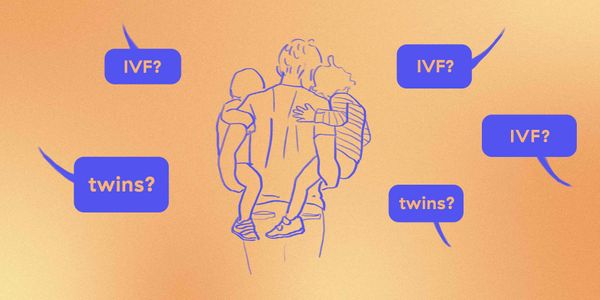 People who haven’t been down the IVF route seem to know two things:

However, neither of these are true - in fact, IVF isn't a perfect solution for everyone.

Read more:
Breastfeeding shouldn't have to be private, but my vulnerability is
Here's what it's like to be pregnant during a pandemic
How early should I take prenatal vitamins?

Truthfully, it’s a bloody miracle to have one baby via IVF, and twice as miraculous for twins.

I’ll never forget a morning I trekked with my newborn twins to the local Woolworths to be met with questions about how they came into the world.

What mattered was this: I was at the supermarket, pushing three-week-old baby twins around the junk food aisle in a “desperate search” for a pack of clinkers (the lollies I loved as a kid). I paused my hunt to smile at anybody who stopped to gush over my babies. I didn’t mind when they asked silly questions like, “Are they twins?” But I felt pissed off when people wanted to know how my kids were conceived.

As far as I was concerned, my babies were a heaven-sent miracle, like the light from a star. Why the hell did it matter to anybody else how they got here?

I lost my first baby two years before my twins were born. Being blessed with twins after all that heartache was my reward for all that praying and crying, and all those invasive tests I went through to find out why the hell I miscarried. For all that pain, I was given not one but

TWO babies. That’s what it felt like. A magnificent reward.

So I was at the supermarket with my living, breathing miracles, searching for Clinkers, when a woman stood by the pram, smiling and cooing at my boys.

Then, she burst my bubble.

Three words to wipe the smile from my face.

I mumbled something about my father being a twin – my dad (an identical twin) is always my alibi – and scurried away, without my Clinkers.

But that was just the beginning.

Since then, hundreds of people have asked the same question. Some boldly ask, “Are they IVF?” But most ask “Are they natural?”

The soft people ask, “Are twins in the family?” That’s when I start talking about my dad and they nod – you can almost hear them thinking, “Okay, so they’re natural – not IVF.”

If I’m in the mood for an information dump, I’ll tell them more: my Aunty Janet was a twin but her sister died at birth. I also tell them about my sister-in-law’s twins who arrived three months before my own.

“I’m the daughter of a twin, the mother of twins, the aunty of twins and the great-niece of a twin,” I say.

And that’s why, all these years later, as the mother of teenage twins, I’m still pissed off that so many people “need” to know how my twins were conceived.

When you’re trying to get pregnant, every time your period arrives you feel like a failure.

The thought of having to wait one more month to “try again” is painful. Also, when you’ve lost a baby and you’re trying to get pregnant again, the very sight of a pregnant woman feels like daggers in your eyeballs (okay, that’s very dramatic, but I did feel a stabbing pain in my heart when I saw a pregnant woman, a baby, or any child really).

When you ask a mother of twins if she went through IVF, you have no idea about the years of pain leading up to attempting fertility treatment. It’s not as though people wake up one day and say, “I’m going to try IVF!” There’s almost always a sad story on the path towards that decision.

When you ask a twin mum if her twins are “natural” it feels like you’re really asking why you needed help to do something that most people do easily. Even if you’re just being innocent and curious, it feels like you’re prying, or making us feel like we’re being judged somehow.

Whenever someone asked one of my friends if her twins were “natural”, she would always reply “no, they’re aliens.” I wish I’d had the nerve to use that comeback, but I never did.

Two women in my mother’s group had conceived via IVF and they’d had singleton babies – yet they told me nobody had ever asked them if they had had IVF. So next time you see a twin mother, think twice before you ask her if her babies are “natural.”

If she’s anything like me, you’ll be sticking one more needle in her bubble of joy.

And if you feel the need to chat, just tell her her babies are cute. Help her find some Clinkers. Smile at her babies. They’re alive, they fill her life with joy. That’s all you need to know.